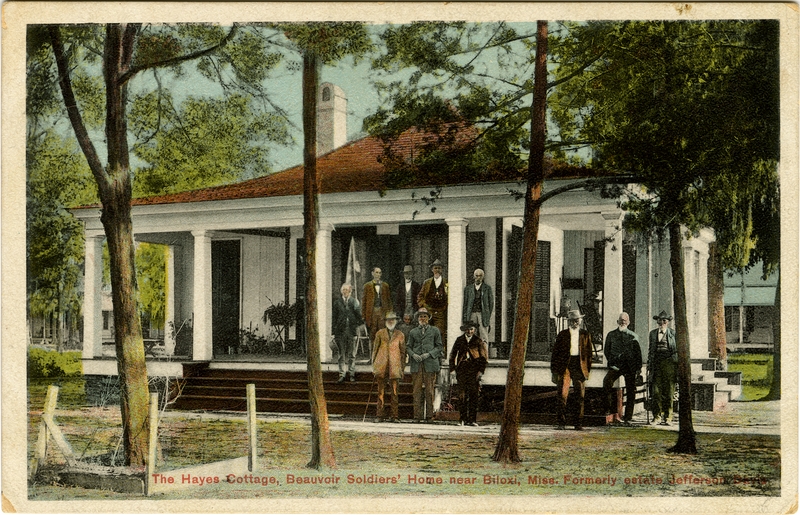 Introduction to the Project

Welcome to the official website of the Beauvoir Veteran Project (BVP), directed by Susannah J. Ural, Ph.D., professor of history and co-director of the Dale Center for the Study of War & Society at the University of Southern Mississippi. This site was designed by Dale Center Ph.D. candidate Allan Branstiter and is maintained by Southern Miss and Dale Center alum Stephanie Seal Walters, a Ph.D. candidate at George Mason University. The BVP uses Mississippi’s state home for Confederate veterans and their wives or widows — officially known as the Jefferson Davis Soldiers’ Home and commonly known as Beauvoir — as a lens through which to study the late-nineteenth century lives of impoverished Mississippians and their families in the Civil War Era and the New South.

Despite the wealth of scholarly work on the Civil War-era South, historians still know too little about middle- and lower-class Southern whites because they often lacked the education, funds, and security needed to preserve or publish records of their experiences. This weakness in the historiography has been compounded by the fact that historians who study Confederate homes have focused too heavily on the Civil War era, failing to analyze these facilities as creations of the New South, not just reflections of the Old South. They need to be studied with an eye toward both eras.

The Beauvoir Veteran Project, launched in 2014, offers a quantitative analysis of Mississippi’s Confederate home, which operated from 1903 until it closed its doors in 1957. The facility was a New South icon in the state, a success story that legislators celebrated as a symbol of Mississippi’s ability to establish and run a modern, efficient home to care for aging and impoverished Confederate veterans and their wives or widows. It was also a symbol of the Lost Cause due to the residents themselves, as well as the home’s previous owner, former Confederate President Jefferson Davis.

Studying these facilities has its challenges. The records of many southern veteran homes, especially residents’ applications, have been lost or destroyed. This is true of Beauvoir, both in terms of sources and its physical condition. Hurricanes Camille and Katrina battered the Mississippi coast in 1969 and 2005 respectively, leaving only the original plantation-style home (which required major renovations after Katrina), two small cottages, and the gardens and cemetery of the once vibrant Confederate veteran facility. Residents’ and staff cottages as well as the hospitals, chapel, dining hall, kitchen, and dairy have all been sold off or destroyed. The vast majority of Beauvoir residents’ applications are missing, as are some home operations records.  Still, sufficient Beauvoir records remained to allow for a careful study of its operations. This includes the original home “Register.” In it, each new resident was recorded by date of admission, name, age, county of residence, and the military unit in which the veteran or the widow’s husband served. Death or discharge dates are usually included as well, and sometimes notations about residents’ re-entry, burial location, and family contact information are added. Board meeting minutes and biennial reports have also survived, along with some hospital and supply ledgers, limited superintendent correspondence with residents and their families, and a few personal accounts from inmates, as they were known at the time.

Over a three-year period, researchers at the University of Southern Mississippi studied these surviving records of the Jefferson Davis Soldiers’ Home in an effort to understand the experiences of the 1,845 men and women who lived there from 1903 through 1957. The team created a random representative ten-percent sample of the residents and gathered additional information on those men and women from digitized census, military service, pension, and newspaper records. These sources offered insights into veterans’ and their families’ prewar and postwar wealth, slaveholding status, educational levels, literacy rates, property ownership, wartime injuries, infant and adult mortality rates, and early-twentieth-century financial stability.

As a case study, the Beauvoir Veteran Project cannot speak for the experiences of Civil War veterans and their families across the nation or even the South. But it does raise significant questions about the field’s conclusions on Confederate veteran homes and where these may need revision. For a detailed historical analysis of Beauvoir see the article by Susannah J. Ural, “‘Every Comfort, Freedom and Liberty’: A Case Study of Mississippi’s Confederate Home,” The Journal of the Civil War Era 9 (March 2019), 55-83.

This site is meant to share the results of the BVP with wide audiences. There are biographies of residents, a page on the unique story of Beauvoir’s three African-American pensioners, lesson plans for teachers, and a spreadsheet of the data collected during the project. We hope this material will be of use to scholars, teachers, researchers, and the general public. If you have any question, please contact BVP director Dr. Susannah J. Ural.

The BVP would not have been possible without the support of Jane and Charles Sullivan of Mississippi Gulf Coast Community College for the wealth of source material they shared and for their unfailing support. Thanks, too, to the dozens of Southern Miss graduate and undergraduate students whose research uncovered the stories of these residents. This is especially true of the Summer 2016 and Summer 2017 research team. Most importantly, we thank the University of Southern Mississippi’s School of the Humanities for selecting BVP Director Dr. Susannah J. Ural as the 2015-2017 Charles W. Moorman Distinguished Alumni Professor of the Humanities, which provided the time and funding necessary to complete this project.