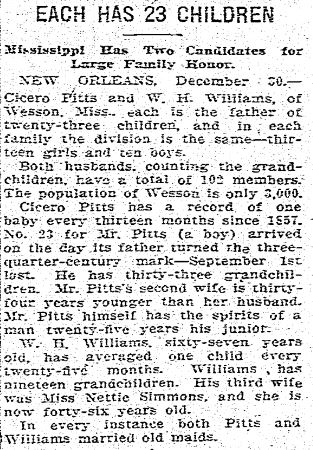 In 1907, the Richmond Times Dispatch published an article about two men from Wesson, Mississippi, who claimed to be the fathers of twenty-three children each. One of these men was a former private in the 36th Mississippi Infantry named Cicero Pitts. He had fathered a baby, as the Time Dispatch noted, an average of once every thirteen months from his early twenties until he was seventy-five years old.

Pitts was born in Georgia in 1833 before his family moved to Copiah County, Mississippi, where his parents (Wesley and Milly) established a plantation. He remained in Copiah after marrying his first wife, Matilda, who gave birth to their first child in 1859. According to the 1860 U.S. Census, Cicero Pitts’s estate was worth a respectable $1,280 and he also owned three slaves—a twenty-two year old woman, a two year-old boy, and a six-month old baby girl.

Like many men his age with families, Pitts did not enlist in the Confederate Army immediately after the Civil War started. Instead, he waited until May 2, 1862, when he enlisted for twelve months in Company E of the 36th Mississippi Infantry. Pitts and the 36th Mississippi spent much of the summer operating around Corinth, until September when they joined Major General Sterling Price’s army in Iuka as part of Colonel John D. Martin’s brigade.

Determined to prevent the Confederates from consolidating forces in Iuka, Mississippi, Major General Ulysses S. Grant ordered Major General William Rosecrans to drive away Price’s army of 3,179 men. On September 19, 1862, Rosecrans attacked the rebels two miles south of town around 4:30 pm. Forty-five minutes into the battle, the 36th Mississippi supported Brig. General Louis Hébert’s brigade as they counterattacked and temporarily captured a battery of Union artillery. Fierce fighting followed as the opposing forces alternated control of the field several times until a final bayonet charge by Martin’s brigade and the 36th Mississippi failed to drive the Federals back.

By the time Price withdrew his army from Iuka, twenty-two soldiers from the 36th Mississippi had been killed or wounded—including Cicero Pitts, who had been shot through both thighs and taken prisoner. The U.S. Army soon paroled Pitts, who returned home to recover from his wounds. Although the Confederate Army’s records do not mention his condition after October 1863, Pitts later stated on his pension application that he received a medical discharge due to the severity of his wounds. He had only been in the army for eight months.

Pitts remained in Copiah County after the war where he and Matilda farmed and raised their ever-increasing family. Matilda Pitts died sometime after 1880 and Cicero married Martha “Mattie” White, who was thirty-two years his junior. Many of Cicero Pitts’s children continued living on his farm as adults, and several of them worked at the textile mills in nearby Wesson.

Pitts moved into the Jefferson Davis Soldiers Home on March 22, 1920 when he was eighty-seven years old, but he was discharged the following May. He died on June 30, 1921 while visiting family in Allen Parish, Louisiana, where he is buried. Mattie Pitts lived until 1931, and she is buried in Copiah County.